Lechem Mishneh: Back To The Beginning VI By ADMIN on JANUARY 28, 2010

Countdown To Chanukah 30 - Safe Place By RABBI-SIMCHA-WEINBERG on NOVEMBER 13, 2020

Was Cain a Hobbit? 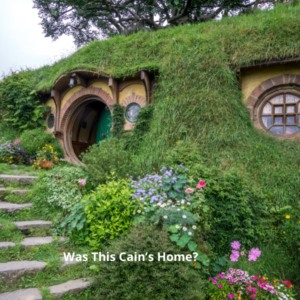 Someone challenged “Each Step,” by demanding the Halachot that guide Rocinante, my Time Machine, on its travels.

Yes, Discover Magazine has posted the Rules of Time Travel, but those are rules, not Halacha, or, they are Chukim similar to the laws of gravity, but certainly not Halacha!

That is similar to saying that my interaction with other human beings is governed by rules rather than gently guided and directed through a moving process.

Yes, of course, there are numerous Halachot regarding Time Travel. In general they are referred to as the Laws of. Moadim, meeting points in time, but, all Halacha can be applied.

One of the first Halachot I learned almost sixty years ago about Time Travel is that I cannot actually see the face of the ancient characters.

I asked my father if we could travel back to the Garden before the sin.

I wanted to see what Adam and Eve actually looked like; did they look Chasideshe or Yeshivish, Ashkenazi or Sepharadi, and, I wanted to see if people looked different before the sin.

My father ruled that I could not go back before the sin because one may not see an ancestor naked; it’s a violation of both respect and awe, and, Halacha encourages us to not consider the physical part of our conception but the spiritual intentions.

I willingly accepted my father’s ruling for our next trip back in time, so I asked if we could set the dial for after the sin, after Adam and Eve were dressed by God.

My father was hesitant because he felt Adam and Eve would feel embarrassed if we met them after the sin that obviously inserted evil people into creation, such as rabbis who were ignorant of Time Travel!

“The Hobbit,” had me pestering my father for a trip to see whether Cain looked like Gollum, but he somehow succeeded in distracting me and took me for a trip to France to visit Rashi and study the verses about Cain with the great rabbi and ancestor. The ancestor part spoke so powerfully to my ego that that Rashi trip continues to this day, Every week.

Until, that is, I found out that there really is a question about Cain being a Hobbit, even a monstrous one, a Gollum!

I respectfully suggest that when time traveling to pre-Noah and the Flood Biblical world, that you invite along Dr. Sang-Hee Lee, who is to paleoanthropology what Michio Kaku is to physics, the author of “Close Encounters with Humankind,” and, far more significantly, a fan of Steinbeck’s “Travels With Charley.”

Her book has a chapter, “Hobbits,” about a hominim of very small size: Homo floresiensis. She writes about an interesting legend about the island of Flores, Indonesia.

‘The legend talks about Ebu Gogo, a little person barely 3 feet tall, with large feet and fur covering its body. This legend may have inspired the humanlike hobbit from The Lord of the Rings.’

The problem of determining whether this is actual Cain, or Gollum is to figure out how the fossil arrived on Flores before the Flood. (I told you we needed Dr Lee for this trip!)

She continues, ‘ A complicated problem, however, lurks beyond the simple numerical dates (author’s note: not a problem for time travelers or bible thumpers!) Any map of Southeast Asia shows numerous islands in the South Pacific. These islands are surrounded by seawater, some shallow and some deep, and a deep water line called the Wallace Line divides this area into two regions: Southeast Asia and Australia. North of the Wallace Line, where Java is, the water is shallow and during the cyclical glacial ages the sea level was even lower than it is now, meaning that most of the islands in this northern region were connected to the Asian mainland. Animals, including hominims could easily walk to these islands.’

‘The island of Flores, however, is located south of the Wallace Line and is surrounded by deep sea. ‘

How did this creature get there?

I want to invite Dr Lee to join me on my trip because if this Hobbit is Cain, we could explain his presence because of his sentence. “You shall become a ceaseless wanderer on earth (Bereishit 4:12 – sefaria.org)!”

The hands of the hominim suggested use of tools, which certainly indicates Cain,  whose descendants, “As for Zillah, she bore Tubal-cain, who forged all implements of copper and iron. (4:22).”

I foresee an issue with Dr. Lee in that she focuses a great deal on a skull’s size and shape to determine the size and capacity of the brain. How will we, considering the size of his skull,  be able to calmly discuss, “Now the serpent was the shrewdest of all the wild beasts that the LORD God had made. He said to the woman, “Did God really say: You shall not eat of any tree of the garden? (3:1)”

I’ll hold off on that invitation for now, as I recall reading Marco Polo, learning about the Silk Road and asking my father about the language issue ruining the Tower of Babel project…