The Plan: The Smile of Heaven 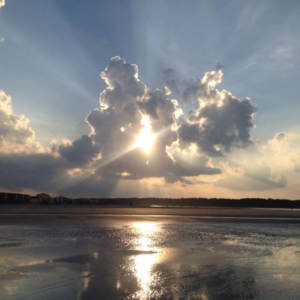 We wandered to the Pine Forest

That skirts the Ocean’s foam,

The lightest wind was in its nest,

The tempest in its home.

The whispering waves were half asleep,

The clouds were gone to play,

And on the bosom of the deep

The smile of Heaven lay;

It seemed as if the hour were one

Sent from beyond the skies,

Which scattered from above the sun

A light of Paradise.

“This coast is a wellspring for writers,” Alvis said. “Petrarch invented the sonnet near here. Byron, James, Lawrence – they all came here to write. Boccaccio invented realism here. Shelley drowned near hear, a few kilometers from where his wife invented the horror story (Beautiful Ruins).”

And we, the Children of Israel, responded to “The Smile of Heaven,” by composing the Song of the Sea.

And God responded to our Smile at Heaven, with the mysteries of Creation:

‘They came to Marah, but they could not drink the water of Marah because it was bitter; that is why it was named Marah.

And the people grumbled against Moses, saying, “What shall we drink?”

So he cried out to the LORD, and the LORD showed him a piece of wood; he threw it into the water and the water became sweet.

There He made for them a fixed rule, and there He put them to the test.

He said, “If you will heed the LORD your God diligently, doing what is upright in His sight, giving ear to His commandments and keeping all His laws, then I will not bring upon you any of the diseases that I brought upon the Egyptians, for I the LORD am your healer.”

And they came to Elim, where there were twelve springs of water and seventy palm trees; and they encamped there beside the water (15:23-27).’