in Heaven & Earth, New Post, Portion of the Week, Tehilim - Psalms, Torah, Use of the world by Rabbi Simcha Weinberg on 04 Jan, 2021 0 Comments 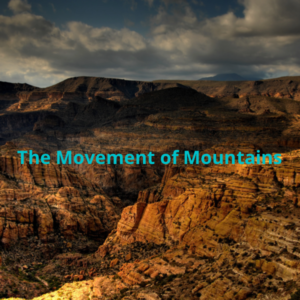 “Now Moses, tending the flock of his father-in-law Jethro, the priest of Midian, drove the flock after the wilderness, and came to Horeb, the mountain of God (Shemot 3:1).”

Why Is It ‘The Mountain of God’?

Rashi comments, “in order to keep them away from private property, (i. e. things which can be appropriated only as the result of “robbery”) — that they should not graze in other people’s fields (Exodus Rabbah 2:3).”

This, in turn explains why this is called the Mountain of God, “Scripture so names it with reference to what happened there in the future (Sifrei on Deuteronomy 1:24).” All that happened at this first and all future meetings here, including Revelation, were instigated by Moses’ integrity.

Why Is The Mountain of God also named ‘Horeb’?

It seems as if the Ibn Ezra read the opening section of William Atkins’ “The Immeasurable World,” when he focuses on the reason why the Mountain of God is called, ‘Horeb’:

“To Horeb, the mountain of God”—Thus wrote Moses. And the reason it is “Horeb” (i.e. dry) is because of the great heat, for rain did not fall there, because it was close to Egypt, [only] a three day’s walk, as Moses spoke. And because the Nile was far away, there was no moisture there, and the dryness prevailed.”

Why Was Moses There?

Rabbeinu Ovadia Sforno explains offers an alternative to Rashi’s explanation of why Moses led his sheep to this place:

“Moses, all by himself; he wanted to pray and meditate there in complete isolation and concentration.”

Why ‘After’ the Desert?

The Da’at Z’kenim explains, “he led the flock after the desert.” The choice of the word ‘after’ here is to serve as a hint that when G–d’s flock in the desert, i.e. the generation that left Egypt as adults had all died, and he had been buried where they had been buried, in the desert, God could bring the next generation to the land of Israel right away; this is why the verse ends with describing the mountain where Moses stood as being already “the Mountain of G–d.”

Moses referenced this Mountain (Not the Burning Bush!) and its lessons in a Psalm he composed:

“A prayer of Moses,

the man of the Lord.

O My Master, You have been our refuge in every generation.

Before the mountains came into being,

before You brought forth the earth and the world,

from eternity to eternity

You are The Source of Power.

You return man to dust;

You decreed, “Return you mortals!”

For in Your sight a thousand years are like yesterday that has passed, like a watch of the night.

You engulf men in sleep; at daybreak they are like grass that renews itself;

at daybreak it flourishes anew; by dusk it withers and dries up (Psalm 90:1-6 – sefaria.org).”

Since discovering Robert Macfarlane, I’ve been devouring his books and I was not surprised to find hints of the ideas of Rashi, Ibn Ezra, Sforno and Da’at Z’kenim, and of Psalm 90 in his writings:

‘Before publishing “Of Mountain Beauty,” John Ruskin spent years walking the Alps; sketching, painting, observing, meditating. He was convinced that mountain ranges were shaped and arranged like waves. They were waves of rock – ‘the silent wave of the mountain’ – and not waves of water.

‘Moreover, said Ruskin, mountain ranges, like hydraulic waves, were prone to motion. They had been cast up by colossal forces, and were still being moved by them.

‘That the movement of the mountains could only be imagined and not witnessed was – as James Hutton had pointed out – a function of the minute life-span of a human being.

‘They were not static, but fluid: rocks fell from their summits, and rainwater poured off their flanks.

‘For Ruskin, this perpetual motion was what made mountains the beginning and end of all natural scenery.

‘Those desolate and threatening ranges of dark mountain, which, in nearly all ages of the world, men have looked upon with aversion or terror and shrunk back from as if they were haunted by perpetual images of death are, in reality, sources of life and happiness far fuller and more beneficent than all the bright fruitfulness of the plain.’ (“Mountains of the Mind,” by Robert Macfarlane)

I guess this is an appropriate place for a tangent by way of Life and Death, Resurrection, the World to Come, Malachy Tallack’s “The Un-Discovered Islands,” Kate Harris’ “Lands of Lost Borders,” and, Colin Thubron’s “Mirror To Damascus.”

I was able to connect every “place” in “The Un-Discovered Islands” to an idea discussed in the closing chapter of Tractate Sanhedrin of the Talmud, the chapter from which we derive Maimonides’ Thirteen Principles of Faith.

Kate Harris (Tibet) and Colin Thubron (Damascus) write of a magical place that spreads out as Four Rivers to nurture the world, just as does a surface read of Genesis 2:10, “A river issues from Eden to water the garden, and it then divides and becomes four branches.”

Neal Ascherson’s “Black Sea,” references a Great Flood and the Khazars of the Kuzari.

I do not believe that Torah is simply another, more profound, holier perspective on a Universal idea.

I do believe that the seeds of all universal ideas are found in the Torah, as a Shinshoku describes to Rabbi David Zeller z”l in his, “The Soul of the Story.”

There is truth all around us. Torah is God’s gift to us to discover, discern, and develop these truths to connect with the Source of all existence.

I do not equate the magnificent writing of Robert Macfarlane with that of King David in Psalms.

I do believe that Macfarlane is blessed with rare gifts, and I am grateful for his existence and work.

I do not believe one must read any of these books in order to understand Torah.

I do believe that many of these books can enrich the way we study Torah.

I read them in order to apply Torah to everything, every place, every person, every belief in the world.

My Mountain moved with me to California, to St. Louis, to Saratoga Springs, to NYC, to Yonkers.

My Mountain guided me in visits to countries all over the world.

My Mountain moved and grew through multiple challenges and stages of life.

There have been moments and situations when I let go, or stopped climbing. My Moving Mountain sings to me the Psalm of Moses,

“To count our days rightly, instruct!

That we may get a heart of wisdom.

Come back, O Lord! How long?

Have pity on Your servants.”

And, my Moving Mountain moves to catch me, to offer a new entranceway, a new path.

Each call while I was sitting Shiva for my sister Aviva z”l ended with, “Hamakom yinachem etchem,” usually translated as, “May The Ominipresent Comfort You…”

Perhaps, “HaMakom,” refers to that Place of Places, the Mountain of God that stands in Horeb, when my life is parched, someone important has died.

I heard “HaMakom” as May the Moving Mountain bring you comfort.

Torah is the way this “minute life-span” human being can connect with the Infinite.

I must approach, as taught by Rashi, with the integrity of Moses, careful with the property and feelings of others.

I must understand, as taught by Ibn Ezra, that this Moving Mountain will nourish me when parched for clarity.

I must prepare for climbing my Moving Mountain, as taught by the Sforno, by using my isolation/quarantine to meditate and pray.

I must use the perspective of the Da’at Z’kenim, to appreciate that the Mountain moves through time just as it does through space.

I must, as taught by Moses in Psalm 90, use each movement in time, space, life, perspective, to reconnect with the Source of my Existence, to live a life of Teshuva as a Moving Mountain.