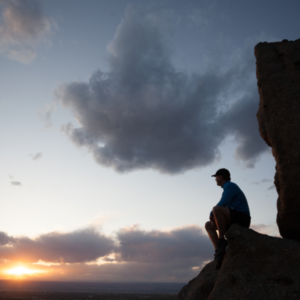 I began the Story Magic series with a Gregory Clark column, and since Brian Ross – to whom it was dedicated – responded in an unfunny way and is now having his Canadian citizenship examined, being unfamiliar with Mr. Clark, I shall pause to pray Mincha and perform a Cheshbon HaNefesh (Spiritual Self-examination) with Mr. Clark and his Algonquin Ojibway guide, Nahda-weh.

‘… I heard a strange moaning and groaning from the direction Nahda-weh had gone. I hurried to him.

He was sitting on a boulder, rocking gently, and making strange, sing-song sounds. Chanting.

“I was just saying my everyday song,” he said.

It is a prayer. It is uttered at sunset. Before bidding good-bye to the day, the Indian goes to a quiet place.

And there he remembers every single thing that has happened during the day now dying. Every detail. And he recites it. Forgetting not one particular, not one chipmunk seen scuttling across the trail, nor one butterfly, nor one bird song, he recollects, in that half-hour of tranquility at sundown, the whole story of the day.’

He honors in gratitude each detail of his day. It is a source of great spiritual strength.

Mr. Clark continues by sharing a decades later evening sharing a Pullman car with a clergyman and a psychiatrist, the latter, excitedly sharing a sleep inducing method more effective than counting sheep:

“Instead of counting sheep, or resorting to any of the old wives’ tricks for inducing sleep, I allow myself to relax by trying to remember, as I lie in bed, every detail of the past twelve or fourteen hours of my day.”

In “The Squirt, (pg 24)” Mr. Clark shares a short conversation that offers some insight into the art of “Everyday Song.”

‘So when my young friend, looking her most possessive, introduced me to him and he shook hands with a big, close grasp, I asked him what he had been looking at as he came up the rocks.

“A skink,” says he, “a fritillary, some Indian Pipe and a wood frog.”

And, by gum, we became friends on sight. For I havee always liked a man, especially a young man, who wastes not a moment of life but sees all things great and small.

And in case you don’t know what a skink is, it is a small, blue-tailed lizard; a fritillary is a beautiful tan butterfly, the undersides of its wings spangled with great patens of pure silver; Indian Pipe is a strange spirit flower, a ghost that comes softly to dwell by the blessed habitations of men; and the wood frog is an elf that looks like any other frog but is daintily different.

A man who will see these things in fifty yards walking up my rocks is a man, alert.’

I prefer Nahda-weh’s “Everyday Song,” to the psychiatrist’s sleep inducement primarily because it demands alertness and is used, not for sleep, but to enhance awareness and gratitude.

In another column, “The Greatest (pg. 104),” Mr. Clark is sitting on the beach in Northern Canada with a Cree named Fletcher. As an Indian Affairs doctor hikes to a hidden cabin to treat Fletcher’s mother, the two sit in silence until a plane flies overhead:

“That is a wonderful thing,” I stated.

Fletcher watched it slowly vanishing in the misty sky. “But,” he said, in his turn. “It is not the most wonderful thing.”

“What,”I asked duly, “is the most wonderful thing?”

I was astonished, and let Fletcher look at my astonishment in my easily penetrable eyes.

“A snare?” I questioned.

Fletcher sat for a moment thinking about snares, to get it just right for utterance.

“A man can be alone,” he began. “He can be without anything. No wire in his pocket, no string even. He hasn’t got a knife, an axe. He is alone. But he can make a snare. From watap, from the roots of spruce or tamarack, from many things, he can make a snare.”

Fletcher paused, and we traded a steady gaze.

“He can get a rabbit,” he went on. “He can eat. He can catch more rabbits, and make a robe. He can use the rabbit flesh to set bigger snares. He can make snares of the rabbit’s skin. He can snare bigger animals, for their fur and their flesh. He can build and tie together a shelter.”

“He will live,” said Fletcher.

“That (plane),” he said, “is not a wonderful thing. It is a strange thing. It needs too much. It needs mechanics… pilots..engineers…gas…oil… and one thing goes wrong, and it all goes wrong.”

When the doctor returned to the two men he explained they needed the plane to get Fletcher’s mother to a hospital.

They soon found out that the plane crashed somewhere in the bush. No one knew where.

Although I disagree with Fletcher about planes being wonderful things, I could imagine Fletcher being more skilled than I at “Everyday Song.”

That is, until Shabbat, and her Halachot – Journeys had me considering all the things and seeing all that is wonderful in everything.

Perhaps that is the meaning of the Midrashic description of Sarah’s Shabbat Candles burning from Friday all the way through till the next Friday; they focused her “Everyday Song,” just as we sing each day of the week: “This is the song of First, Second, … Day of the Holy Shabbat the Levites would sing on the stage in the Temple…”