Countdown To Chanukah 12 - Threefold Boundary By RABBI-SIMCHA-WEINBERG on NOVEMBER 26, 2020 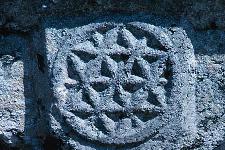 Toward the conclusion of Parshat Vayeitzei we discover, according to the Megaleh Amukot, two allusions to the Chanukah story. We discussed one in “Countdown To Chanukah 13 – From Beginning To End.” I would like to attempt to delve into the depths of Rabbi Nathan Natan Spira. It’s fair to assume that Rabbi Spira uses the basic story and text to open the door to the hidden depths and mysteries:

The final confrontation between Jacob and Laban – a confrontation so significant it is considered by many to be an essential section of the Pesach Seder –  concludes with a pact:

“Come, then, let us make a pact, you and I, that there may be a witness between you and me.”

Thereupon Jacob took a stone and set it up as a pillar.

And Jacob said to his kinsmen, “Gather stones.” So they took stones and made a mound; and they partook of a meal there by the mound.

And Laban declared, “This mound is a witness between you and me this day.” That is why it was named Gal-ed;

and [it was called] Mizpah, because he said, “May the LORD watch between you and me, when we are out of sight of each other.

If you ill-treat my daughters or take other wives besides my daughters—though no one else be about, remember, God Himself will be witness between you and me.”

And Laban said to Jacob, “Here is this mound and here the pillar which I have set up between you and me:

May the God of Abraham and the god of Nahor”—their ancestral deities—“judge between us.” And Jacob swore by the Fear of his father Isaac.

Jacob then offered up a sacrifice on the Height, and invited his kinsmen to partake of the meal. After the meal, they spent the night on the Height.

The Megaleh Amukot finds the Chanukah story hidden in, “Laban named it Yegar-sahadutha.” Yegar, he explains, has the numerical value of 213 Y=10, G=3, R=200. The Chanukah story took place 213 years after the dedication of the Second Temple, the Beit Hamikdash over which the Chanukah battles were waged.

Surely there is an aspect of this final meeting between Laban and Jacob that hints to the nature of the Chanukah confrontations and miracles:

(On Chanukah and Purim the following prayer is added. If you omitted it, you need not repeat the Shemoneh Esrei. If, however, you became aware of your omission before concluding the blessing, you should say it at that time, and conclude by saying, “וְעַל כֻּלָּם, and for all the foregoing.”)

[We thank You] for the miracles, for the redemption, for the mighty deeds, for the deliverances and for the wars that You performed for our fathers in those days at this season.

In the days of Matisyahu, son of Yochanan the High Priest, the Hasmonean and his sons, when the evil Greek kingdom rose up against Your people Israel to make them forget Your Torah and to turn them away from the statutes of Your will—

You, in Your abundant mercy, stood by them in their time of distress,

You defended their cause,

You judged their grievances,

defiled people into the hands of the undefiled,

the wicked into the hands of the righteous,

and insolent [sinners] into the hands of diligent students of Your Torah.

And You made Yourself a great and sanctified name in Your world.

And for Your people, Israel, You performed a great deliverance and redemption unto this very day.