Countdown To Chanukah 8 - The Hallel of The Sun By RABBI-SIMCHA-WEINBERG on NOVEMBER 30, 2020 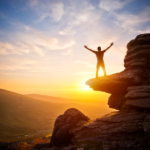 How Small Is Sinai By RABBI-SIMCHA-WEINBERG on FEBRUARY 7, 2021

“If Israel’s entire assembly shall err, and a matter became obscured from the eyes of the congregation, and they commit one out of all the commandments of God that may not be done, and shall become guilty. When the sin regarding which they erred becomes known, the congregation shall offer a young bull as a sin-offering, and they shall bring it to the front of the Tent of Meeting. (Leviticus 4:13-150The Sanhedrin must bring an offering when it rules in error. (Rambam, Hilchot Shegagot – The Laws of Offerings for Unintentional Transgressions)

“From the eyes of the congregation,” refers to the Sanhedrin because they chart the life of the nation through the eyes of Halacha.

“Eidah,” or congregation derives from “adi,” a precious ornament, a fitting similie for the Sanhedrin. (Haketav V’Hakkabala)