The Plan: The Archeologist’s Seder 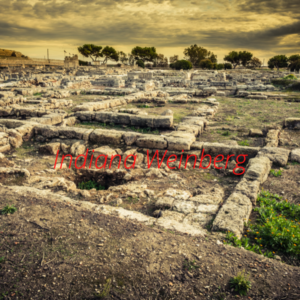 There’s a scene in Sarah Moss’ “Ghost Wall,” that has me considering using my daughter Anna’s training as an archeologist to take an entirely new approach to the Pesach Seder.

A group of college students and their professor allow Silvie and her parents to live with them for two weeks in the north of England as if they are ancient Britons, surviving by the tools and knowledge of the Iron Age.

Silvie, upon meeting these strangers begins to dream of life outside the control of her abusive father, and, upon reflecting on the titular Ghost Wall built to ward off enemy invaders, realizes, “this re-enactment means that we ourselves became the ghosts, learning to walk the land as they walked it two thousand years ago, to tend our fire as they tended theirs and hope that some of their thoughts, their way of understanding the world, would follow the dance of muscle and bone.”

It is far too late when Silvie realizes that such intense re-enactment will lead to the professor and her father building a Ghost Wall of their own, and its inevitable next step, human sacrifice, with her father willingly offering her as his sacrifice.

No, Anna, that’s not why I want you at the Seder (especially since your first dig in Israel was an Iron Age settlement); I promise, no human sacrifice this year. However, I want to use the archeologist’s skills to walk as they walked, tend fires as did they, and access their thoughts and way of understanding.

We will have to begin by finding ways to compensate for missing ingredients.

For example, when I offer to enslave invited guests and children for a few weeks, with beatings added purely for authenticity, I am unanimously refused.

No slavery. No beatings.

Need I mention that no one volunteered to be circumcised!

So, how can we make up for those fundamental elements?

It seems that it is even more challenging while living in an apartment building than it was when we lived in Riverdale to tie up an animal for three days in the front yard. Building management refuses to allow a fire pit and spit in our apartment or in any common areas.

We can’t even bring a lamb into the building.

No offering. This is quickly becoming a failed archeological study.

You can’t imagine the concierge’s reaction when Amazon wanted to deliver my Hyssop Bunch and Bucket of Paschal Blood (12:22)!

I calmly explained how I was going to apply the blood to the lintel and two doorposts. He was incredulous! He looked at me as if I were from another planet!

No Hyssop. No Blood. No lintel/doorpost symbols.

It’s Debbie who refuses to allow me to invite the Angel of Death into the building! I only wanted one minute at midnight!

“What did these people ever do to you?” she asks.

You won’t believe my next problem! God won’t Pass Over our apartment as long as people are living in the apartment above us.

No Slaying of the First Born!

Even our dogs are refusing to cooperate (11:7); refusing to promise to not bark if I somehow manage to have everyone else in the building screaming and crying!

Debbie is refusing to start preparing dough to rise the morning after the Seder for when we are rushed out of the building (12:39) –  Oh! Did I happen to forget to mention that lots of people in the building got angry when I knocked and asked to borrow all their gold and sliver, and jewelry (verse 36) – so, we are kind off being rushed out, but no dough to turn into Matzah…

This archeological Seder is an absolute disaster! The worst part for me is that, “In each and every generation, a person is obligated to see himself as if he left Egypt.” How can I do that if no one will cooperate?

‘Had I followed my pleasure and chosen what I plainly have a decided talent for: police spy, I should have been much happier than I afterwards became (Kierkegaard – Journals, 1843).’

As a professional police spy, I have perfected the skill of uncovering diabolical plots and sophisticated plans for anything such as those that caused Pharaoh to worry, ‘And he said to his people, “Look, the Israelite people are much too numerous for us.

Let us deal shrewdly with them, so that they may not increase; otherwise in the event of war they may join our enemies in fighting against us and rise from the ground” (Exodus 1:9-10).’

And as Rashi, our best detective explains, ‘it is as though Scripture wrote “and we shall have to go up out of the land” and they will take possession of it.’

I even joined the line of people for circumcision so I could pretend to be an Israelite, ‘If a stranger who dwells with you would offer the passover to Hashem, all his males must be circumcised; then he shall be admitted to offer it; he shall then be as a citizen of the country. But no uncircumcised person may eat of it (12:48).’

I knew why I was willing to undergo the procedure and all the other guys were too uncomfortable to be subtly interviewed.  I did overhear a couple of men discussing having an identity other than being a slave.

I asked some guys in the recovery room why they were willing to bake Matzah when it was such a staple of being a slave, and everyone was happy that something so negative could become a positive commandment. (I keep on confusing the words Matzah and Mitzvah; big mistake for a secret spy; Note For Secret Spy Journal: Turn bad things into positives. Practice Hebrew!)

Uh oh! I have to put away my Secret Spy Journal; some guy just asked me why I write in Hieroglyphics rather than Hebrew…