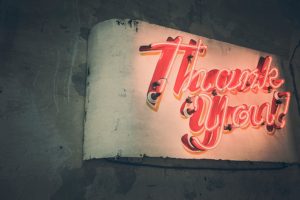 The Ten Confessions of Yom Kippur and the constant review of the Thirteen Attributes of Mercy (Exodus 34:5-7, and Micah 7:18-19) are not two distinct parts of our Yom Kippur Service. Together they form a single form of Service: The Gratitude Confession.

The excellent Artscroll Machzor includes, “We have been ungrateful and traitorous to those who have helped us. By violating the Mitzvos, we have been disloyal to God Who gives us life and sustenance.”

Thanklessness is also included in the more detailed “Al Cheit,” “For the sin that we have sinned before You through denial.”

Mabit teaches that being ungrateful is not only a detail of the Confession; he includes the awareness that we have repaid God’s generosity with sin as an essential part of the Confession-Teshuvah process.

Walking in His ways – this includes all matters of uprightness and correction of character traits. This is what our sages of blessed memory explained (Shab.133b) “just as He is merciful, be also merciful…” The general principle of all this is for one to conduct all of his traits in all the variety of his deeds according to what is just and ethical. (Sefaria.org)

The character traits are naturally embedded in the lowly, fundamental soul of man. This soul is comprised of four aspects; inanimate, vegetative, animate and articulate. They too are a composite of good and evil. Therefore, the good and bad character traits depend on this soul. They constitute a seat, foundation and root for the upper, intellectual soul, upon which the 613 mitzvoth of the Torah depend, as mentioned above in gate one. Because of this, the character traits are not included as part and parcel of the 613 mitzvoth. Nonetheless, they are essential prerequisites to their fulfillment or negation, for the simple reason that the intellectual soul is powerless to fulfill the mitzvoth with the 613 organs of the body except through the agency of the fundamental soul which is connected to the body. This is the secret meaning of the verse20Leviticus 17:14, “For the soul of every flesh; its blood is its life.” This being the case, the bad character traits are actually much worse than the transgressions themselves.

We may now understand why our sages, of blessed memory, said, “When a person loses his temper, it is as if he is actually worshiping strange gods” – which is a negation of all 613 mitzvoth of the Torah! Furthermore, they said, “Whosoever has a haughty spirit is likened to one who denies the fundamental truth of G-d’s existence. He is worthy of being cut down like an Asherah grove. There are many such quotes. Contemplate this greatly and consider that since the character traits are root causes and fundamental characteristics embedded in the natural soul, they are not counted amongst the 613 mitzvoth that depend on the intellectual soul. We, therefore, find that greater caution must be taken to safeguard oneself from bad character traits, than even from fulfilling the positive mitzvoth or desisting from committing the negative mitzvoth. This is because if a person possesses good character traits, he will not find it difficult to fulfill all the mitzvoth. (Sefaria.org)

the characteristic of gratitude is included in the commandment of, “You shall walk in His ways.”

And the priests and the people who were standing in the Temple Courtyard when they heard the glorious and awesome Name [of God] explicitly pronounced from the mouth of the High Priest with holiness and with purity, they bowed, prostrated themselves,

My father zt”l pointed out that the Hebrew for Confession and Gratitude are practically homonyms as there is an element of confession in every expression of gratitude: “I admit that you helped me.”

At the most intense moments of Yom Kippur, when all are bowing in response to the Cohen Gadol’s pronouncing God’s Great and Holy Name, we are filled with Gratitude – “offered thanks.”

It’s no surprise that the Service ends;

A great joy burst forth, happiness and rejoicing rang out. The clouds above dripped, and showered forth their dew. The furrowed fields brought forth their produce.

by those who harvested their crop in peace.

by those who carried the sheaves joyously. The lowliest places of the beautiful land rang out with song.

God’s goodness was told by all who traveled through byways.

He was the hope of those who sent him, their faith was not misfounded. Their hope to him was like the coolness of snow on a hot harvest day. From their filth they were washed, from their offensive dirt they were purified.

The complete and perfect ones, from a well—had cleansed their hands.

To tell all, that their Purifier [God] is a source of living water.

The purifying waters of Yisrael had cleansed them with [His] faithful waters.

With purity and cleanliness, they will be cleaned and purified.

They will be renewed, like the renewal of morning; from their stain, they will be polished clean.

The praises of the Almighty will be spoken in their throats, on their tongues will be singing, from their mouths will come a new song.

They will rejoice, with trembling and will worship with awe.

The Holy One of Yisrael, Who sanctifies His holy people.

To cheer, to sing, to beat the drum, and beat the cymbal;

to sing songs, and to play music.

Embraced, with the strength of the glorious Right Hand of God.

Supported in unity, filled with righteousness, they will be drawn to enter His gates, with joy.

Joy and happiness will be theirs forever.

Rejoicing and celebrating in His Name the entire day, together in joy in His Presence.