in Free Will, General Providence, God & Israel, New Post, Portion of the Week by Rabbi Simcha Weinberg on 31 Jan, 2021 0 Comments 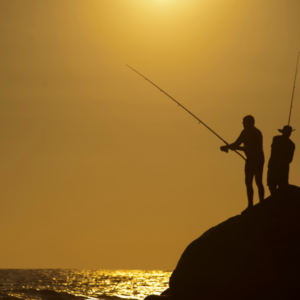 J. Accused me of always bagging his books as soon as he had begun to read them. I said, “it’s like fishing. I see you’ve got a bite. I want your line. I want to pull it in.”

‘Moses came and summoned the elders of the people and put before them all that God had commanded him.

All the people answered as one, saying, “All that God has spoken we will do!” And Moses brought back the people’s words to the God (Shemot 19:7-8).’

How beautiful! How deep! How insightful!

“All that God has spoken we will do!”

How is that a proper response to,

“You have seen what I did to the Egyptians,

how I bore you on eagles’ wings and brought you to Me.

Now then, if you will obey Me faithfully

and keep My covenant,

you shall be My treasured possession among all the peoples.

Indeed, all the earth is Mine,

but you shall be to Me a kingdom of priests and a holy nation (verse 4-6).”

Would it not have been more respectful to respond,

“We accept the covenant!

We want to be Your treasured possession!

We Want to be a kingdom of priests!

We will strive to be a holy nation!”

Did they not comprehend the depths of the message from God conveyed through Moshe?

Was this really only about obedience?

It sounds to me as if they heard some tidbits and grabbed onto the positive message without nuance.

It sounds very similar to what Katherine Mansfield above described as grabbing the line, or the book.

I recall my father zt”l visiting someone’s home and, as was his practice, headed directly for his bookcase where he found a Sefer he had previously never seen. He sat down, opened the book and, within moments, his mouth open, he proclaimed to Uncle Noach zt”l, “This is unbelievable. I have seen such clarity only in the Rishonim – time period as Rashi and the Rambam – I need to find this man and sit at his feet and study Torah!”

He was going to leave his life behind, his position as a Rosh Yeshiva to study Torah from someone so accomplished.

He continued to read and soon had a look of devastating disappointment on his face, “ This is nonsense! Idiocy! How did someone so great write such garbage?”

Uncle Noach and he examined the index and realized that the selection that enthralled him had actually been written by the Rashba, a 13th Century Sage! The rest of the book, “the nonsense, idiocy, garbage,” was recent.

My father saw the Rashba’s essay and was ready to grab a new life!

“Until one is committed, there is hesitancy, the chance to draw back.

Concerning all acts of initiative and creation, there is one elementary truth, the ignorance of which kills countless ideas and splendid plans:

that the moment one definitely commits oneself, then Providence moves too.

All sorts of things occur to help one that would never otherwise have occurred.

A whole string of events issues from the decision,

raising in one’s favor all manner of unforeseen incidents and meetings and material assistance, which no man could have dreamed would have come his way.

Boldness has genius, power, and magic in it.

W.H. Murray “The Evidence of Things Not Seen”

Fishing for purpose, grabbing books, and stealing the line, even simply declaring, “All that God has spoken we will do,” are dangerous only without commitment.

The opening scene at Sinai is not about the subtleties but about the magic of commitment without hesitation.

I call it “Mountain Fishing.”