in Individual Providence, New Post, Portion of the Week by Rabbi Simcha Weinberg on 26 Jan, 2021 0 Comments 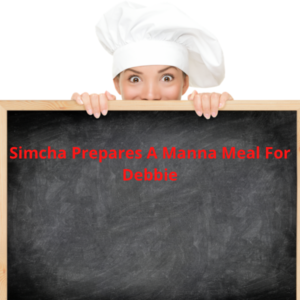 It seems that far more people prefer a short Loom recording to one of these essays. I understand. So, I had to rethink my writing, something I love although not one of my better skills.

I remembered once reading of M.F.K. Fisher saying to Ruth Reichl, who mentioned how strange it must be, after writing into a void all those years, to suddenly become so popular, “When you write you have no idea if you’ll ever be read by any human being.”

Mary F.K. Fisher looked horrified. “Write to yourself?” She said. “It’s like kissing yourself, don’t you think?”

“I have to write towards somebody I love.”

So, I’m writing towards people I love!

I’m rejoicing over recalling a long ago read MFK Fisher because she was one of the great American food essayists, perfect for this week’s portion, Beshalach, when we are introduced to Manna. I actually believe that Fisher would, for many reasons, love Manna!

For example, when Ruth Reichl, herself one of the great American chefs and food writers first met Fisher, she, “expected caviar, I guess, and foie gras. Something exotic. Instead it was split pea soup and what she called ‘a modest local wine.’ She even cooked on the same simple electric stove as did Reichl’s mother!”

M.F.K. Fisher would have eaten the same Manna as you and me!

One of my favorite Fisher essays is, “I Is For Innocence,” … and its strangely rewarding chaos, gastronomically.

I found an online edition on lilysandlimes.wordpress.com:

‘There is a great difference in my mind between innocence, in this gourmand interpretation, and ignorance. The one presupposes the other, and yet a truly innocent cook or host is never guilty of the great sin of pretension, while many an ignorant one errs hideously in this direction.

An innocent, on the other hand, will not bother to pretend any knowledge at all. He will, with a child’s bland happiness, do the most god-awful things with his meals and manage by some alchemy of warmth and understanding to make any honest gourmet pleased and easy at his table.

The best example of this that I can think of happened to me a few months ago.

I know a large, greedy, and basically unthinking man who spent all the middle years of his life working hard in a small town and eating in waffle shops and now and then gorging himself at friends’ houses on Christmas Day. Quite late he married a large, greedy, and unthinking woman who introduced him to the dubious joys of whatever she heard about on the radio: Miracle Sponge Delight, Aunt Mabel’s Whipped Cheese Surprise, and all the homogenized, pasteurized, vitalized, dehydratized products which were intrinsic to the preparation of the Delights and the Surprises. My friend was happy.

He worked hard in the shop, and his wife worked hard at the stove, her sinkside portable going full blast, of course, so as not to miss a single culinary hint, and then each night they wedged themselves into their breakfast-bar-dinette and ate and ate and ate. They always meant to take up Canfield…but somehow they felt too sleepy. About a year ago he brought home a little set of dominoes, thinking it would be fun to shove the pieces around in a couple of games of Fives before she cleared the table. But she looked deeply at him, gave a great belch, and was dead.

He was desperately lonely. We all thought he would go back to living in the rooming house near the shop, or take up straight rye whisky, or at least start raising tropical fish.

Instead he stayed home more and more, sitting across from the inadequate little chromiumed chair his wife had died in, eating an almost ceaseless meal. He cooked it himself, very carefully. He listened without pause to her radio, which had, almost literally, not been turned off since her death. He wrote down every cooking tip he heard and “enclosed twenty-five cents in stamps” for countless packages of Whipperoo, Jellebino, and Vita-glugg. He wore her tentike aprons as he bent over the stove and the sink and the solitary table, and friends told me never, never, never to let him invite me to a meal.

But I liked him. And one day when I met him in the Pep Brothers’ Shopping Basket, where occasionally I fought back my claustrophobia-among-the-cans long enough to buy the best frozen fruit in town, he asked me so nicely and straightly to come to supper with him that I said I’d love to. He lumbered off, a look of happy purpose wiping the misery from his big face, like sunlight breaking through smog. I felt a shudder of self-protective worry, which shamed me.

We had a tinned “fruit cup,” predominantly gooseberries and obviously a sop to current health hints on JWRB. Once having disposed of this bit of medical huggermuggery, we surged on happily through one of the ghastliest meals Fever ate in my life. On second thought, I can safely say the ghastliest. There is no point in describing it, and, to tell the truth, a merciful mist has blurred its high points. There was too much spice where there should be none;

There was sogginess where crispness was all-important; there be an artificially whipped and heavily sweetened canned-milk dessert where nothing at all was wanted.

And all through the dinner, in the small, hot, crowded room, we drank lukewarm muscatel, a fortified dessert wine sold locally in gallon jugs, mixed in cheese-spread glasses with equal parts of a popular bottled lemon soda. It is incredible, thank God, but it happened.

I am glad it did. I know now what I may only have surmised theoretically before: There is indeed a gastronomic innocence, more admirable and more enviable than any cunning cognizance of menus and vintages and kitchen subtleties. My gross friend, untroubled by any affectations of knowledge, served forth to me a meal that I was proud to be a part of. If I felt myself at times a kind of sacrificial lamb, stretched on the altar of devotion, I was glad to be that lamb, for never was any goddess in the temple poured nectar with more innocent and trusting enjoyment than was my hideous glass filled with a mixture of citric acid, carbon dioxide, and pure vinous hell. I looked into the little gray, deep eyes of my friend and drank deep and felt the better for it.

He had not pretended with me or tried to impress me. He knew I liked to eat, so he had cooked for me what he himself enjoyed the most. He remembered hearing somewhere that I liked wine with my meals, so he had bought “the mixings,” as he knew them, because he wanted me to feel gay and relaxed and well thought of, there in his dear woman’s chair, with her radio Still blasting and her stove still hot. I felt truly grateful, and I, too, felt innocent.

When Debbie and I felt prepared to introduce ourselves to each others families as a new unit, I invited Debbie and her children to my apartment for dinner.

I always had warm fresh baked Duncan Hines cinnamon brownies (from a mix) ready for my kids when they came home from school. I also had a donut machine and prepared all sorts of mixes so each child could make his or her own donuts.

I had a full stash of healthful snacks such as peanut butter M&Ms, chips, and multiple healthful drinks.

After some snacks and playing, they would sit down and do their homework and then I would prepare a nice dinner, usually from Dougies with corn dogs, hamburgers and extra crispy onion rings and french fries.

Debbie knew that I cooked a lot for the kids so was perfectly happy to bring Michael and Anna to my apartment directly from school so the two families could begin our process of connecting.

Five minutes after their arrival, I believed that our relationship was over; for some strange reason, Debbie Las Delicias Brenner was shocked by how well I fed my children.

Now, twenty-five years later, I am still not allowed to be in charge of ordering dinner or cooking for my grandchildren when they visit. My children, traitors all, seem relieved when they learn it is Debbie, not I, who is preparing dinner.

You know, if MLK Fisher can eat, “Miracle Sponge Delight, Aunt Mabel’s Whipped Cheese Surprise, and all the homogenized, pasteurized, vitalized, dehydratized products which were intrinsic to the preparation of the Delights and the Surprises,” without complaint, why could Debbie not?

If Fisher reflected that, “If I felt myself at times a kind of sacrificial lamb, stretched on the altar of devotion, I was glad to be that lamb, for never was any goddess in the temple poured nectar with more innocent and trusting enjoyment than was my hideous glass filled with a mixture of citric acid, carbon dioxide, and pure vinous hell,” why could Debbie not appreciate my innocence?

I guess she did; she still married me!

Let’s recreate that scene in my Tent in the Israelite Camp in the desert:

Debbie comes with her kids to introduce the two families, and I serve Manna. In order to practice being a gracious host, I print a menu with 131 Flavors from which to choose for my Manna experience.

I’ll even add pictures to help with the mental aspect in eating Manna.

Would Debbie have the same reaction?

Could I use, “He had not pretended with me or tried to impress me. He knew I liked to eat, so he had cooked for me what he himself enjoyed the most,” to invite Moses to my house for some shared Manna?

I am wondering how a young couple dating, having a soda in a hotel bar, with a Manna basket, would share their food experiences; is that what they discussed on dates in the Sinai?

How could each evaluate the cooking skills of the other?

How do you handle the boredom issue over forty years of Manna?

I haven’t had Las Delicias Corn Bread in months. I am actually considering eating some chocolate rugelach rather than cinnamon!