How Small Is Sinai 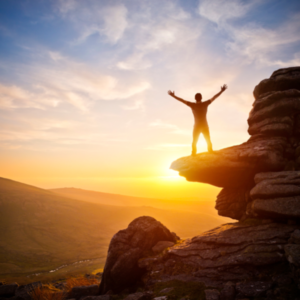 “How small Sinai appears when Moses stands upon it (Augustine of Hippo, Confessions).”

‘Why do you lurk, you lofty mountains, for the mountain that God desired for His dwelling?” (Tehillim 68:17)

R’ Yosi haGalili explained the verse as referring to the mountains.

Mount Tabor came from Bet Elim and Mount Carmel from Espamia, this is what is written “As long as I live, says the King, Whose name is the Lord of Hosts, that as sure as Tabor is among the mountains, and Carmel is by the sea, it shall come about.” (Yimiyahu 46:18)

The Holy One said ‘Why do you lurk, you lofty mountains?’ You are all high mountains, but what does lofty (gavnunim) mean? As it says “…or one with long eyebrows (gibein), or a cataract…” (Vayikra 21:20) Idolatry was done on all of you,

but Sinai upon which idolatry was never done “…the mountain that God desired for His dwelling,” (Tehillim 68:17) “The Lord descended upon Mount Sinai…” (Shemot 19:20)

And yet, being Sinai-small is not enough. One must also be a mountain.

The Torah was given on a mountain and not in a valley, for to live the Torah, we must be humble on the one hand, but proud on the other.

To live the Torah, we must be fully aware of our immense worth in the eyes of G‑d (Rabbi Menachem Feldman, chabad.org).”

I sat on Shabbat with the Midrash above for hours.

I walked this morning thinking about Rabbi Feldman’s beautiful idea.

Yet, I picture the scene at Sinai and return to Augustine.

I realize that over the last 12 months I “had” too view the “humility” of Sinai only in juxtaposition to the potential of the human being who can “stand on Sinai, view the world from Sinai’s perspective, and climb down the mountain and carry Sinai into the world;

I “had” to, for there would not have been any way for me to survive the tumult of the past year without full awareness our potential surpasses the limitations of place.

I reread the Midrash and I find the choice of the mountain to be one that did not displace Moshe as the meeting point between Heaven and Earth.

I reread the Midrash and I find Rabbi Feldman’s reminder that we must “be fully aware of our worth in God’s eye’s,” for it was in God’s eyes that Sinai was dwarfed by Moshe’s presence.

I reread the Midrash and understand that we stood at Revelation and understood,

“How small Sinai appears when Moses stands upon it,”

And, that we saw ourselves in his reflection.