Countdown to Chanukah 23 – Eye to the Brain II 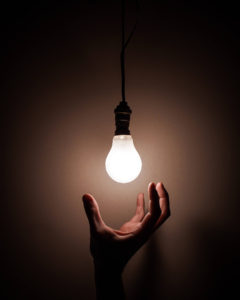 The Ohr HaChaim HaKodesh goes one step beyond our description of vision as an entrance to the intellect (https://thefoundationstone.org/countdown-to-chanukah-24-from-eye-to-brain-i/), and speaks of the eye as a Spiritual sense (Devarim 32:10, ‘pupil of his eye’).

This is why Rav Abba had the Divine Name in front of him whenever he wanted to elevate his learning to a Higher World (Zohar Mishpatim).

The Holy Satmar Rebbe zt”l spoke of the candle on the head of a fetus in the womb as described in the Talmud: And a candle is lit for it above its head, and it gazes from one end of the world to the other, as it is stated: “When His lamp shined above my head, and by His light I walked through darkness” (Job 29:3). And do not wonder how one can see from one end of the world to the other, as a person can sleep here, in this location, and see a dream that takes place in a place as distant as Spain [beAspamya]. 20 And there are no days when a person is in a more blissful state than those days when he is a fetus in his mother’s womb, as it is stated in the previous verse: “If only I were as in the months of old, as in the days when God watched over me” (Job 29:2) -Nidah 30b – sefaria.org

The Rebbe explained that we don’t see the candle because it is formed by the light of the Torah it is being taught by the Angel – the Torah’s light empowers to “gaze from one end of the world to the other.” Once the Angel causes the child to forget the Torah he has learned, the candle disappears.

The Chanukah candles represent the candles on our heads when we were being taught Torah by the Angel when we were in the womb. Each candle is a celebration of the Torah we have learned, recapturing the light we had in the womb.

We sing Hallel to celebrate recapturing our own light!