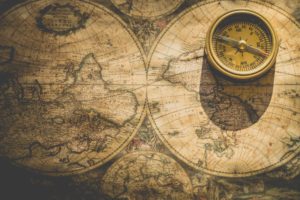 It’s a challenge when even Amazon doesn’t carry one.  I need a special compass each year to find a magical place called “Kedem” when positioning my Succah.

A common Yom Kippur refrain, “Bring us back, O God, toward You, And let us come back; Renew our days as of Kedem (Lamentations 5:22),” calls us back to that magical place. Where is that place?

I have long believed Kedem refers to, “He drove the man out, and stationed at Kedem of the garden of Eden the cherubim and the fiery ever-turning sword, to guard the way to the tree of life.(Ibid. 3:24).” Adam had a choice to fight his way past Cherubim and flaming swords to regain entry to the Garden and the Tree of Life. Yet, at that moment in Kedem he chose to focus on the curse imposed and never turned to battle his way back to his beginnings, his Kedem.

We ask God to “Renew our days as of Kedem,” as if to say, “Place us back in that place and we will ignore the curse, the mundane, and turn to fight our way to the Tree of Life.

“In the merit of leaving my home and moving outdoors, running the path (of life) toward Your Mitzvot, May it be considered as if I went into exile to be cleansed of my sins (Prayer Upon Entering The Succah).” In this exile I will focus my efforts to Succah to appear as a Garden in Eden.

We move outdoors and reconnect to that moment when just after the original Cloud, “a mist would well up from the ground and water the whole surface of the earth (Bereishit 2:6),”

“God The Lord planted a garden in Eden, coming from Kedem, and placed there the man whom He had formed. (Bereishit 2:8).” “Renew our days as of Kedem!”

There was someone who made a feeble, almost disheartened attempt to regain entry, Cain. The very person to whom God said, “Surely, if you do reach just a little higher, you will elevate all of creation (4:7).”

He, as his father failed at Kedem, refused to look up, to reach. He failed, and, “Cain left the presence of God and settled in the land of Nod, Kedem of Eden (4:16).”

In our Kedem, our Succah, we look up, and finding gaps in the ceiling, look even higher, as if to say, “Renew our days as of Kedem!” Our Succah is our Kedem, we will reach ever higher. We will elevate all of Creation.

With all my good intentions, I lack a Kedem compass; It’s as if a step is missing from placing my Succah exactly at Kedem.

Rabbi Michoel Gutmacher found a Kedem compass for me.

Jonah too had his Kedem; “Now Jonah had left the city and found a place Kedem of the city. He made a booth there and sat under it in the shade, until he should see what happened to the city (Jonah 4:5)

Rabbi Gutmacher derived the essence of Kedem from Jonah:

Then God said to Jonah, “Are you so deeply grieved about the plant?” “Yes,” he replied, “so deeply that I want to die.”

And should not I care about Nineveh, that great city, in which there are more than a hundred and twenty thousand persons who do not yet know their right hand from their left, and many beasts as well!”

Jonah is called to task for not caring for God’s Creation. He is rebuked for not praying for the people of Nineveh.

The Kedem compass is to use our Succah to pray for each other, to pray for all of God’s Creation.

We invite the Ushpizin to pray for all of us across the generations.

We shake Lulav and Etrog in the Succah to reach high and pray for all of Creation.

We leave gaps in the walls, like a Garden.

We live in our Succah as if we are in Kedem.

No wonder we imagine ourselves standing at Kedem when we recite the Thirteen Attributes of Mercy, the same Thirteen that allow us to safely build a Kedem Sanctuary, Mishkan, for the Divine Presence, a Garden for the Ark; the Tree of Life:

Who sits on the throne of mercy,

forgives the iniquities of His people

He removes their sins one by one,

Acting righteously with all who are of flesh and spirit;

not according to their wickedness does He repay them. Almighty! You instructed us to recite

and remember for us this day

the Covenant of Thirteen Divine Attributes,

as You made them known to the humble Moshe

as it is written…

When we take the 4 Minim, we are not simply  shaking anything, we are actually fighting the Keruvim and the flaming sword . The waving movements are here to battle and imitate our sword fight.
And as the Midrash Rabba explains the sword represent also the Bris Milah  (and we know the Lulav and Esrog represent this intimacy) and so we are waving showing that we can have proper intimacy out of love and to come closer to God.
We are ready and not afraid anymore, we are ready to have face to face relationship and intimacy, like the Keruvim, like at Har Sinai, like in Gan Eden and we can fix everything!
Nathan Kruman adds:
Just wondering… is that lulav/sword the same sword that the judges hold by their thigh while standing over Gehenim?