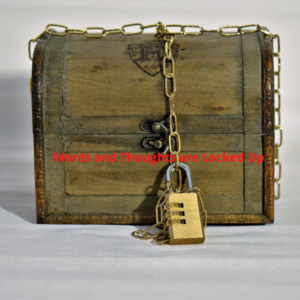 “I turned silences and nights into words.

What was unutterable, I wrote down.

I made the whirling world stand still.”

I’ve been receiving unhappy comments about “A Painful Silence,” all day, even from the person who gave the idea to me: “This is not the silence to which you made reference in, “Looking For Babel Part One – The Language of Silence”!

Those of you who wonder why I’ve been so stingy with recording Looms today, need only read, “Could Yaakov Avinu actually harbor such thoughts and feelings? I read that Joseph couldn’t contact his father because he had to let the dreams play out.” (Alas, even after this, Debbie refuses to allow me to choose to be in a bad mood today!”)

I had to share the idea of Jacob being mute in the face of meeting a powerful son who clearly had recourse over the past nine years to send a message, an email, a text… anything!

I had to turn the questions we hesitate to ask into words: “What was unutterable, I wrote down.”

There is too much silence in us.

The silence of questions not asked.

The silence of admitting discomfort with explanations offered.

The silence of hearts disturbed by teachings and laws.

The silence of shame.

The silence of fear.

I recall a terrible silence, shared by Francis Bacon:

“In the year of our Lord 1432, there arose a grievous quarrel among the brethren over the number of teeth in the mouth of a horse.

For thirteen days the disputation raged without ceasing.

All the ancient books and chronicles were fetched out, and wonderful and ponderous erudition such as was never before heard of in this region was made manifest.

At the beginning of the fourteenth day, a youthful friar of goodly bearing asked his learned superiors for permission to add a word, and straightway,

to the wonderment of the disputants,

whose deep wisdom he sore vexed,

he beseeched them to unbend in a manner coarse and unheard-of and to look in the open mouth of a horse and find answer to their questionings.

At this, their dignity being grievously hurt, they waxed exceeding wroth; and, joining in a mighty uproar, they flew upon him and smote him, hip and thigh, and cast him out forthwith.

For, said they, surely Satan hath tempted this bold neophyte to declare unholy and unheard-of ways of finding truth, contrary to all the many days more of grievous strife, the dove of peace sat on the assembly, and they as one man declaring the problem to be an everlasting mystery because of a grievous dearth of historical and theological evidence thereof, so ordered the same writ down.”

The silence that remained unspoken between Jacob and Joseph, between Joseph and his brothers, between the brothers and Jacob, echoes in our daily Shema when we whisper,

“There is unlimited expansion ready when we speak of God as we know God, to expand the Glory of our relationship helping us touch Eternity: Baruch shem kivod malchuto l’olam va’ed!”

Whisper what we know.

Speak softly of that beyond our ability to articulate.

Hint of what you want to know.

Point to murmurs of truth.

Do not remain perfectly silence, for in such silences, souls are stilled, young novices are cast out and questioners lose their way.