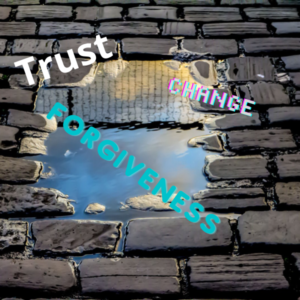 As I was reflecting on “Repairs Required,” wondering whether, and how much a role, the brothers’ inability to take Joseph at face value played in the insecurities that led the extended family to be vulnerable to Egyptian social pressure, I had to reflect on forgiveness:

It seems the brothers refused to accept Joseph’s forgiveness.

We even speak of the sin as alive and consequential 1,500 years later when we recite the story of the Ten Martyrs on Yom Kippur:

‘Having learned the Written law from those who are compared to heaps of grain [Torah Scholars], who understand how to examine the Written Law;

He began to study “These are the Laws,”and with malicious intent, read the verse: “If one kidnaps a person and sells him, if he is found in his hands, he shall be put to death.”

The head of the idolator swelled with malice and commanded to fill his palace with shoes.

He summoned ten great scholars who understood the Law and all of its intricacies.

[He ordered]: “decide this case objectively and don’t distort it with intentional trickery, but rather bring it out to its true light:

If a man was found to have kidnapped one of his brothers, from among the Children of Yisrael; treating him as a slave and selling him.”

They answered him: “The kidnapper should be put to death.”

He then exclaimed “Where are your fathers, who sold their brother and dealt him to a caravan of Ishmaelites for pairs of shoes.”

You, therefore, must accept the law of God upon yourselves, for from the time of your fathers there has been none like yourselves.

For if they were still living, I would judge them before you, but now, you must bear the guilt of the sin of your fathers.’

On the Day of Atonement we ask ourselves whether we believe we will receive atonement or will we carry our mistakes as a heavy burden weighing down our future.

We read the same story on Tisha b’Av and wonder whether our inability to accept forgiveness as a reality drags out the pain of so many devastating events in our history.

I ask today, because tomorrow is yet another Fast:

The Tenth of Tevet;

‘And in the ninth year of his reign, on the tenth day of the tenth month, Nebuchadnezzar moved against Jerusalem with his whole army. He besieged it; and they built towers against it all around. The city continued in a state of siege until the eleventh year of King Zedekiah. By the ninth day [of the fourth month] the famine had become acute in the city; there was no food left for the common people (II Kings 25:1-3 – sefaria.org).’

I ask about the Tenth of Tevet because I have notes in my Spiritual Diaries about feeling besieged:

“Despair and fear do not disappear overnight when the conditions that wrought them have changed.” (I regret not recording the book in which I read this and the following unattributed quotes.)

I think of the brothers when I read this.

I think of the refusal to accept full forgiveness as a siege when I read:

“Chronic pain is a mean strategist—it takes away your life a little at a time.

Acknowledging it goes against some primitive instinct of survival, and so one adapts by denying.

This applies to all kinds of trouble: We find ways to anesthetize ourselves to bad situations. It’s easier, at least in the beginning, to pretend the antagonist isn’t there—or will go away, or not do it again, or not turn out to be such a problem after all.

It’s always easier to wait until tomorrow to make the call.

Then you look up and the trouble has bullied you into a corner of the room and eclipsed everything else in your life.”

Is the Tenth of Tevet related to our very long history of not believing in forgiveness?

Of course, we will proudly proclaim our belief and conviction in God’s forgiveness!

The brothers’ issue was not really an inability to accept forgiveness; it was their inability to trust the “forgiver,” in this case, Joseph, whom they continued to think of the same seventeen-year-old dreamer hanging out with the children of Bilhah:

As we saw in “Repairs Required,”

‘And which of the brothers was it that they so charged [to convince Joseph to forgive them]? The sons of Bilhah who had been accustomed to associate with him, as it is said (Genesis 37:12) “When a lad he used to be with the sons of Bilhah” (Tanchuma Yashan 2:1:2).’

I have seen many people, especially the one in the mirror, who have difficulty forgiving themselves for their mistakes because they don’t trust the forgiver’s ability to change, to remake him or her self.

I have seen many people, especially the one in the mirror, who peer closely at their reflection and see themselves besieged by mistakes, people they have hurt, different versions of themselves angry and frustrated.

I suggest we attempt to seek one person from whom we want forgiveness but have failed to sufficiently trust to grant a favor to we who have hurt them and practice trust; trust they we, at least listen, hear us out, consider our request for that huge favor called “Forgiveness.”

Not a forgiveness exercise.

An exercise in Trust.

Trusting others to change.

Perhaps we will learn to trust our own ability to remake ourselves and slowly break through the siege walls of pain and hurt.